101 anniversary of the Gallipoli Campaign 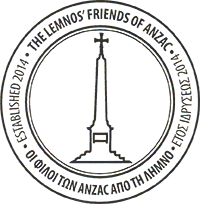 Come with us to celebrate the 101 anniversary of the Gallipoli Campaign and the ANZAC history and to highlight the position of Lemnos, in this global historical happening

Events to highlight historic remembrance in Lemnos, 20-21 April.
Come with us to celebrate the 101 anniversary of the Gallipoli Campaign and the ANZAC history  and to highlight the position of Lemnos, in this global historical happening
Lemnos regional unit with the Association The Lemnos' Friends of ANZAC
www.friendsofanzac.com Official Schedule of Events
"Commemoration activities for the Fallen in the Gallipoli Campaign"
April 20th and 21st , 2016
Events calendar

17.45 Memorial Service
18.00 Remembrance Ceremony and the fallen heroes’ call, to all those dead soldiers, nurses and assistants that participated at the Gallipoli Campaign and laid their bodies at the Lemnian soil. In cooperation with the Commonwealth War Grave Commission, the Athens War Museum, and ‘The Lemnos‘ Friends of ANZAC “ Association .
18.15 Wreath Laying service
18.30 Greetings from The Greek State Officials
18.30 Start of the “RUN FOR PEACE” race under the name “WE PARTICIPATE” which at this part is a symbolic race for the disabled team of the Lemnos Athletic Team. ( Route: Palaio Pedino Village-Portianou Village, 1000 m)
Tour in the cemetery

PORTIANOU CULTURAL CENTER
Termination of the “RUN FOR PEACE” race and awards for the winners and all the volunteers
19.00 Exhibition of photographic material from archives, specialized in WWI.
19.10 The official commencement of the international survey that was proposed at the World congress "WW1 in the Mediterranean-ANZAC and the role of Lemnos", by the Australian Archaeological Institution of Sydney, and which will be carried out in cooperation with various International and Greek institutions and universities. This will be the guide to help us comprehend the times which the Gallipoli Campaign took place, thus leading to a better understanding of the specific role played by each of the participating allies in Lemnos and Greece, as well. ( Co organized with the Lemnos Friends of ANZAC” Association)

10.15 Salutation from the President of the Mudros Cultural Association.
10.30 Exhibition of photographic materials and memorabilia of the 1915 period.
11.00 Detailed presentation of the International project: "Lemnos through the last 100 years - Facing the next 100 years of history". The presentation will be given by Professors of the Greek academic community who are already coordinating with international educational institutions with the main intention being, to activate the international community so that the mistakes of the past become a better guiding light for a more peaceful future. ( Co organized with the Lemnos Friends of ANZAC” Association).

12.00 Grand opening of the newly established Historical and Nautical tradition. information center, from the Lemnos Municipality.
Wreath laying service at the Mudros commemorative plaque on the port (Optional).

Tour in the cemetery.

During the days of the events
A) The Mudros Cultural Center , the Portianou Cultural Center and Portianou Traditional and Folklore Museum will be continuously open for the public
B) The Museums, archaeological sites, will also be open for visitors

Dear Friends of Hellenic History and not only,
The “Lemnos’ Friends of ANZAC” Association established on 2014 and based in Lemnos island. Its main goals are:

The Association is working very close with the Greek State. Most of the events that we have created are under the auspices of HE The President of the Hellenic Democracy, Mr Prokopios Pavlopoulos and many of the Greek ministries (the Ministry of Culture, Ministry of Tourism, Ministry of Maritime Affair and Insular policy, as well as “The Greek Tourism Organization”(EOT), the Ministry of Hellenic Rural Development and Food, the Ministry of Development-General Secretariat for Research and Technology, the North Aegean Region ). The role that our Association plays in the Greek State, is historical, educational and cultural as well as creating a new way of development for the country.
We would like to invite all of you to participate in the national plan that we are working. We have plan for the next 3 years as first stage (2016-2018), a great list of events, all around the world and in Greece as well. We ll be more than happy to explain to you what exactly we do and why your assistance is so important.
We strongly believe that we are working on a project that gives to our country, a good push in this tough times that we are going through. A geopolitical and historical list of events are waiting for you, to be part of these.
With best regards
For the Lemnos ‘Friends of ANZAC” Association
Stelios A .Mantzaris

President of the Board